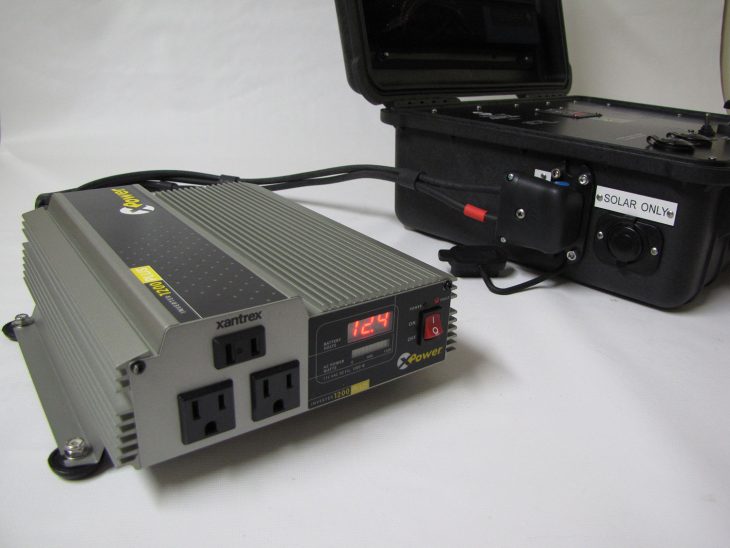 An inverter’s efficiency refers to the amount of AC output power it provides for a given DC input. This is typically between 85 and 95 percent, with 90 percent being the average. When it comes to running things like motors, efficiency is divided into two categories: inverter efficiency and waveform efficiency.

Most motors and many electrical appliances run more efficiently and consume less power when powered by a sine wave. When powering an electric motor, a modified sine wave will frequently require 15% to 20% more power than a real sine wave (such as a pump or refrigerator).

When selecting an efficiency-based power inverter, it is critical to consider the type of loads being powered in order to evaluate true system efficiency.

What Does Efficiency of Inverter Mean?

The efficiency of a power inverter refers to how much of the power that enters it is converted into usable AC (nothing is ever 100 percent efficient, there will always be some losses in the system). This efficiency figure varies depending on how much power is being used at the time, with more power resulting in higher efficiency.

When only a small amount of electricity is consumed, efficiency can range from slightly more than 50% to well over 90% when the output is close to the rated output of the inverter. Even if you aren’t using it for AC power, an ac inverter will consume some of the power from your batteries. As a result of this, low efficiency occurs at low power levels.

The efficiency of an inverter refers to how much DC power is converted to AC power, as some power is lost during this transition in one of two ways:

In general, if the inverter is only partially loaded, the efficiency will be low. As a result, a good match between inverter capacity and load capacity will allow us to achieve greater efficiency, or more AC output power from the inverter for the same DC input power. 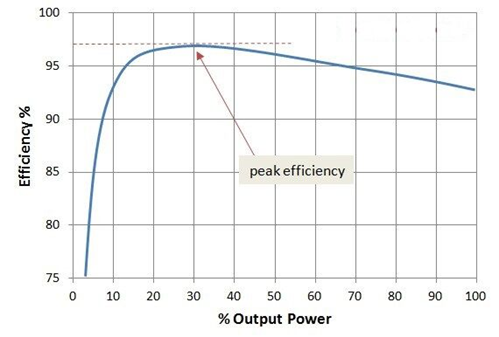 Inverter Efficiency as a Percentage of Output Power (Reference: inverter.com)

A modest 200W inverter, on the other hand, may use only 25 watts from the battery to produce a 20-watt AC output, yielding an 80 percent efficiency.

A bigger power inverter will typically include a feature called “Sleep Mode” to improve overall efficiency. If AC power is required, a sensor within the inverter detects it. If it does not, the inverter will be turned off, but it will continue to detect whether or not electricity is required. In general, this can be changed so that simply turning on a small light is enough to “turn on the inverter.”

Of course, this means that appliances cannot be left in “stand-by” mode, and some appliances with timers (such as washing machines) will not be able to drain enough power to keep the inverter “on” unless something else, such as a light, is turned on at the same time.

Important considerations include wave shape and inductive loads (i.e. a device where an electrical coil is involved, which will include anything with a motor).

Any waveform that is not a true sine wave (i.e. a square or modified square wave) will be less efficient when powering inductive loads – the device may use 20% more power than if a pure sine wave is used. This increased power demand, in addition to lowering efficiency, may harm or shorten the device’s life due to overheating.

There are three types of inverter efficiency, and we need to understand what they mean and how they differ in order to better understand the numerous inverter datasheet models and manufacturers on the market:

Peak efficiency refers to the maximum efficiency of an inverter that can be achieved at ideal output alternating current power, and it can only be used as a quality indicator for inverters.

European efficiency: It is calculated by measuring inverter efficiency at various AC output power points and multiplying it by various weighted numbers. It’s more important than peak efficiency because it shows how the inverter performs at different output power levels during the solar day.

The fundamental difference between European and California efficiencies is the importance of each AC output power level when evaluating efficiency for a given inverter.

The efficiency of an inverter, which determines how much of the DC power generated by a solar array is converted to AC power, is not always a fixed number. This parameter, on the other hand, varies with the input DC power and voltage, with the degree of variation being specific to the ac inverter.

The California Energy Commission (CEC) monitors testing results on various inverters, expressing efficiency as a function of DC power at three different voltages within each inverter’s operating voltage window. As an illustration, the CEC data for a string inverter is shown below. 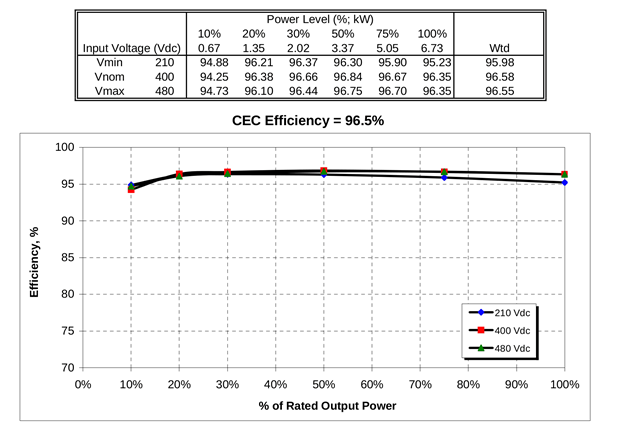 Instead of calculating DC/AC conversion losses using a fixed, weighted efficiency, the performance simulations can examine the entire efficiency of the inverter curve for devices with CEC test data. They fit a parabolic curve to data from power- and voltage-dependent efficiency using a model developed by Sandia National Laboratories. An efficiency curve from Aurora’s component database, which provides CEC data, will be used in the simulation by an inverter.

If an efficiency curve model was used, a log note will be included in the performance simulation report indicating which fixed efficiency was used if the efficiency curve was not available. If no efficiency statistics are available for the component, an error will be generated.

On inverters with multiple MPPTs, each maximum power point tracker (MPPT) operates at its own efficiency. In the same inverter, an MPPT with shorter strings or less input power may be less efficient than another MPPT with higher input voltage and/or power.

The inverter’s efficiency decreases when the DC input power is low in comparison to the nameplate rating. As a result, keep the following in mind:

Undersized designs (in terms of input voltage, but especially in terms of input power) for the chosen inverter will have a lower overall DC/AC conversion efficiency than those that are appropriately designed. String sizing validation can help you ensure that your designs are compatible with the inverter you’ve selected.